Cooking style
My cooking style is rooted in Classical French and broadens it's scope from there. I have experience in all types of cuisine including being a fine dining chef for, among other establishments, an upscale classically rooted American steakhouse for over 6 years. My heart and passion is in rustic Mediterranean cuisine, including France, Italy, and the Middle East.
Experience
More than 3 decades in the culinary industry. I have a long history in Sacramento and strong ties to the community. I am certified as a chef through the American Culinary Federation and have attended courses at the Culinary Institute of America Greystone. I spent numerous years as Chef de Cuisine at Dawson's inside of the Hyatt Regency Sacramento. Some of the highlights of my career have been working under amazing chefs including Masa Nishiyama for ten years at the Hyatt Regency at Capitol Park; being mentioned in the acknowledgements in Harold McGee’s culinary classic reference work “On Food & Cooking” (2004 revised addition), and the interaction and interviews I have had the pleasure to do with chefs throughout the region and beyond.
Influence
American, French, Japanese, Mediterranean, Molecular, Terroir 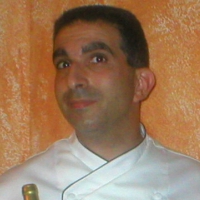