Chef Angel at your Service!

Cooking style
Spanish Chef with experience in Mediterranean and Molecular cuisines.
Experience
Angel was born in a beautiful area in the North-West of Spain called El Bierzo. His grandparents are farmers so his relationship with the products of the land and kitchen comes from when he used to collect, elaborate cold cuts, homemade cheese and prepare canned food. That is why he became interested in gastronomy and decided to study Human Nutrition, Dietetics (specialty in sport nutrition) and Food Industry Engineer. While studying at the University he worked as a caterer. Once finished at the University he worked as a trainer in Cookery and Gastronomy. He continued his training in courses like Bakery and Pastry at the Bakery School of Madrid. With the eagerness of improving his education he began studying as a Technician in Cookery and Gastronomy at the “Escuela de Hosteleria de Madrid” where lots of world renowned Chefs have studied. When Angel finishes studying there, he started working as a Second of Kitchen in pastry, and Second of Kitchen in fish in El Portal de Echaurren Restaurant winning the second Michellin star that year. Continuing with his learning he became part of Mugaritz Restaurant with 2 Michellin starts which, at this time, is the 6th best Restaurant in the World according to the “Restaurant” magazine. Angel moved to Malaga following his wife and began working as a Gastronomic consultant for Frigo (Unilever). Learning from being a consultant he decided to return to the real kitchen as a team leader in starters at La Cala Resort. That was his last work in Spain before embarking on a new adventure with his wife, Maria, in USA. Maria is a 3rd grade Spanish teacher, teaching in a dual immersion program in Sandy, Utah. The new adventure in Utah started being a Gastronomic consultant in Café Madrid, a Spanish restaurant. After finishing this project, he began working as an Executive Sous Chef at Utah Valley University.
Influence
French, Italian, Mediterranean, Molecular, Spanish, Vegan 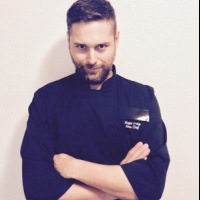