Cooking style
My food is very diverse and packed with flavor. My focus is on highlighting few ingredients with absolute flavor. My inspiration for food is multicultural and often times tied to childhood memories. Growing up in LA I was exposed to a multitude of world foods. I am fascinated with latin american, southeast asian, chinese, japanese, and korean cuisines. My dishes will often times draw inspiration from multiple cultures that are far apart on a map, but so similar in flavors and deliverance.
Experience
I have worked in the food industry for 12+years. I began my training as a seafood butcher and line cook in Costa Mesa, Ca. After sometime in the seafood game, I moved to Santa Barbara. There I worked with hand made pastas and regional italian cuisine. I then moved back to LA where I began to study and train as a sommelier. I worked in west LA for the past couple years, further enhancing my diverse culinary background at Restaurants such as Akasha in Culver City. I have been working most recently as a private chef for clients out in the Inland Empire and Temecula Valley.
Influence
Asian, BBQ, Chinese, Indian, Japanese, Latin 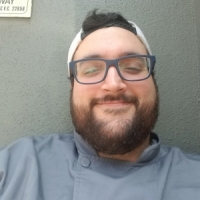