Food Love...You'd Better Have Some!

Cooking style
My cooking style is flexible, anything from regional, to casual to high-end and everything in between.
Experience
Chef Evelyn is the chef and owner of a catering company in Chicago.There she offers diners her eclectic fusion of culture, training and imagination to make the palate and senses pop with every bite. Raised in Chicago, Chef Evelyn honed her business and culinary skills as an Executive Chef with the Morrison Division of Compass Group.She is a graduate of Kendall College where she completed an accelerated culinary arts program while excelling in Kendall’s baking and pastry arts program simultaneously. Chef Evelyn and her culinary creations have been featured on: ABC 7’s The Hungry Hound with Steve Dolinsky, in The Chicago Sun-Times, Patch Chicago, Black Chicago Eats, Eater Chicago, LISC Chicago, The Chicago Defender, on WVON Radio, WBBM Radio, WGN Radio, Operation Breadbasket presents Harambee Radio, Heritage Radio's A Hungry Society and Forbes.com. Most recently, Chef Evelyn appeared in Beard Bites (James Beard), South Side Weekly and on ABC 7’s Windy City Live. Chef Evelyn is a widely sought featured guest, contributor, and panelist by media outlets and various community organizations on various topics including healthy eating; fabulous seasonal recipes and trends; minority business and the importance of community development. An advocate and lover of education, Chef Evelyn has also served as a chef trainer with the ChicagoPublic Schools. A skilled leader in the kitchen on the large and small scale, she has applied her culinary talents in the roles of food service director and personal chef.
Influence
American, BBQ, Caribbean, Decadent, French, Health 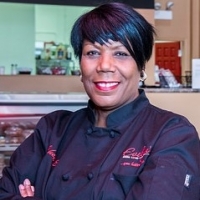