The perfect Beer and Food Pairing Guide for 2019.

In the age of Portland hipsters, craft beer is becoming almost as sophisticated as wine. Long gone are the days of having to choose between a Budweiser and a Coors light to drink with your Filet Mignon. There are so many beers to choose from, pairing one with your meal may seem like a daunting task. Here are a few tips to get you started.

Replace wine with beer and discover a new universe of flavors.

Identifying the Flavours in Your Beer

Hops: Many times people use "hoppiness" to describe how bitter a beer tastes, but not all hoppy beers are bitter. The taste of a hoppy beer depends on when the hops are added in the brewing process. The earlier the hops are added, the more bitter the beer. Hops themselves have a versatile flavor and aroma that can enhance flowery and fruity flavors in the beer. Many breweries also rate how bitter a beer is with an IBU number. IBU stands for International Bitterness Units, and the higher the IBU, the stronger the bitterness.

Malt: Malt comes from the barley grain, and it is usually roasted before it is added to the brew. Roasting barley gives the beer a nutty flavor and a toasty aroma. Plus, during the roasting process, the sugars in the barley caramelize, bringing out a slightly sweet, caramel taste.

Dark: While it may seem more like a description of the color, dark can also be used to describe how a beer tastes. Dark beers are made with malt grain that is roasted until it reaches a dark color. Dark beers are typically roasted longer than malty beers, giving them a richer and heavier taste. The malt's nutty, caramel flavor turns to darker notes of chocolate and coffee with a longer roast time.

Light: Light beer is usually known for having a clean and crisp taste that is refreshing. Typically, light beers don't have a strong flavor and aren't very bitter or hoppy. As a result, most light beers also have a low alcohol content.

…Now that you’ve identified the flavours in your beer, it’s time to start pairing. The rules to pairing beer with food are similar to those of wine pairing…

Taste: The least hoppy of the beers, Light Lagers are well known for their crisp and refreshing taste. Best when served cold, these beers tend to lack a lot of flavour and bitterness.

Pairings: Due to their refreshing nature, Light beers pair perfectly with spicy foods. Light beers are also commonly paired with the Japanese tapa-style meals called ‘Izakaya’. Since the flavour in light beers isn’t strong they pair well with more delicate meals such as salads or fish.

Taste: Wheat beers are often brewed using citrus or fruity flavours due to the weak flavouring of the wheat. The wheat and barley grain mixture also makes Wheat beers less carbonated and gives them a smoother flavour.

Pairings: Wheat beers flavour profile with food is similar to that of a Light Lager, however since wheat beers are often fruity, they pair well with sweet desserts and pastries.

The hipsters choice, IPA’s have become more and more common in the last few years. It is important to note that there are two types of IPA’s - American and British. Examples: Pablo Escobar Gnar, Fat Tug IPA

Taste: Both American and British IPA’s are hop-forward beers of similar strength, from 5 to 8 percent alcohol. The English version is often more balanced, with  moderate bitterness filled in with by ample caramel malt. The hop flavors lean towards the herbal and earthy side with overtones of citrus. American IPAs are even hoppier than their British counterparts with an  aggressive bitterness and juicy, citrusy hop flavors. The malt profile is generally simple with just enough caramel sweetness to provide some modest support.

Pairings: These beers have an incredibly strong flavour, so they need dishes with a similar intensity to stand up. When pairing  an IPA with food you have three basic flavours at your disposal; bitterness, hoppiness and caramel. The strong hoppiness in IPAs pairs well with spicy dishes and light fruity meals. The bitterness of the hops amplifies a meals salty and umami flavours. The caramel flavors in the beer will latch onto the sweeter side of a dish, tying into things like caramelized onion or the crispy skins of roast chicken. Less commonly the hops and carbonation of IPAs make them a great palate cleanser to take on even the fattiest deep-fried delights.

Taste: Amber Ales have a strong flavour of Malt with a sweet caramel undertone that compliment the malt flavours. Though the hops flavour isn’t strong they gave these beers a light flowery aroma and have a dry, crisp, refreshing finish.

Pairings: Due to their crisp refreshing finish, Amber Ales work well as a palate cleanser. This also makes them a perfect match for foods with a strong flavour like barbeque, jerk or a strong curry. The notes of caramel pair well with smoky foods and especially bar foods. So if you’re looking for something to drink while you chow down on the pizza, you should consider reaching for an amber ale.

Taste: Porters are no longer as strong as they once were however they still carry their signature dark colour. Porters are made with roasted brown malts that give the beer strong notes of chocolate, caramel, and coffee. Although both porters and stouts are thick and silky, porters have a crisper finish than stouts.

Pairings: The roasted brown malts give the beer a strong flavour and so they should be paired with foods that have a similar flavour and texture. Porters pair well with buttery and rich foods such as lobster, crabs and similar seafoods. Additionally, dishes like Mexican mole and barbecue have a good depth of flavor and dark, sweet chocolatey undertones that really bring out the coffee and chocolate notes in porters.

Taste: Stouts are similar to Porters in their rich and creamy taste however the flavours in Stouts are typically much stronger than those in a Porter. Contrary to their dark color, stouts do not necessarily have a high alcohol content or bitterness. They are often characterized by their rich flavour and rich, creamy, silky texture.

Pairings: Due to their strong chocolate and coffee notes, Stouts surprisingly pair excellently with a heavy sweet breakfasts. Think Pancakes or French Toast. So next time you’re reaching for your coffee, consider switching it out for a more exciting breakfast beverage alternative. Stouts are also commonly paired with Oysters or shellfish due to their briny and slightly sweet flavour that pairs well with the dark and roasted flavour of the beer. 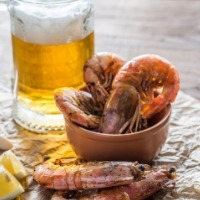 Beer is proof that God loves us and wants us to be happy.- Benjamin Franklin

Discover MiumMium
The largest Personal Chef Marketplace in the world!